By NORTH Foundation October 14, 2020 No Comments Proud parents Victoria and Danny Liston welcomed their first child daughter Kiera Brady Liston on May 4th 2020, and sadly, without warning, they were forced to say goodbye just a few short hours later.

“We had an ‘uneventful’ pregnancy and did all of the screening and tests with no issues or concerning results. Everything always came back “normal”. We did everything right, and somehow this still happened.” Victoria shares.

Kiera passed away, unexpectedly, from overwhelming sepsis as a result of Group B Streptococcus (GBS), just a few short hours after being delivered into her parents’ arms. At the routine screening conducted at 36 weeks, Victoria had tested negative.

“It didn’t make any sense. It was, and still is, such a shock,” says Danny. By all counts, Victoria and Danny, had what most people would see as a ‘healthy pregnancy.’ Each scan, test and appointment followed the routine journey of a healthy pregnancy without any indication there would be complications. The couple had no reason to believe the delivery of their daughter Kiera would be anything different.

Victoria was 40 weeks + 6 days pregnant when she arrived at The Mater Hospital for her scheduled induction.

“Following the routine pregnancy, the induction was pretty standard as well. I did not require treatment on the night of arrival, and I was given Pitocin the following morning to get things moving. The monitors they had on me were showing everything was proceeding well with both Kiera and I throughout the day” Victoria shares.

However, as Victoria’s labour progressed, she developed a mild fever about thirty minutes before delivery, and it was also noted that Kiera’s heartbeat had increased. As a result of this, their Doctor discussed with Victoria and Danny that they would use intervention to speed up the final stages of delivery to ensure that Kiera came out as quickly as possible.

“Everyone in the room appeared calm, and we were all excited about the baby’s impending arrival”, Danny recalls.

A vacuum and then forceps were used to assist in the delivery of Kiera, and after approximately 30 minutes, Kiera was born, and everything looked good. She was briefly placed on Victoria’s chest before being taken to get cleaned up.

In the minutes that followed, doctors noticed Kiera’s breathing was laboured. It was first thought that Kiera’s difficulty in breathing was due to potential meconium aspiration, which is not unusual, and they continued to monitor but thought that she would be fine in a minute or two.

“The pediatric nurse said that Kiera looked “all good” and she was “happy with her colouring” but due to the laboured breathing,  she wanted to take Kiera to the special care unit so that she could receive oxygen. I was told that she’d be brought right back to me shortly.” Victoria explains.

A short while later, the doctors decided that they were going to transfer Kiera to the Neonatal Intensive Care Unit (NICU) at a nearby hospital.  There still seemed to be no significant cause for concern as they tried to stabilise her for this transfer. As her condition did not improve over the next five hours, Kiera was given oxygen, antibiotics, intubated, bloods were taken, and scans were conducted. With Kiera’s condition continuing to deteriorate in the special care unit, and the doctors unable to stabilise her, it was not clear why she was not responding to any treatment.

Kiera spent about five hours in the special care nursery with emergency teams trying to stabilise her for transfer to a NICU.  Eventually, even though the medical team did all they could, they were unable to stabilise her, and she, unfortunately, passed away. Ultimately, Kiera succumbed to what was determined via a post mortem, to be congenital pneumonia caused by sepsis due to GBS.

In the following days, Victoria and Danny were able to use a cuddle cot to spend precious days with Kiera – moments they are forever grateful for and that were captured by photographers from the charity ‘Heartfelt’. 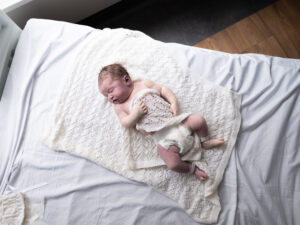 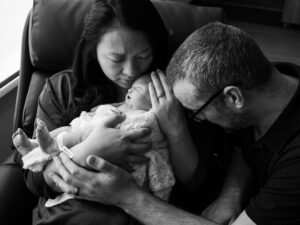 Both Victoria and Danny’s families live overseas and with restrictions in place due to COVID-19 combined with the pandemic it was hard for them to get the emotional support that they needed while dealing with such an unexpected tragedy.

While Victoria and Danny were trying to come to terms with the worst news they could imagine, the hospital had organised for a social worker, to help guide them through. Deb de Wilde proved to be a crucial resource and, according to the couple, “became their Aussie mum overnight.”

“Deb was, and still is, the best person we have ever met, which is saying something given it was during the worst time in our lives. In those initial hours and days, she pretty much never left our side. She guided us and helped us organise the postmortem and all of the necessary paperwork, the funeral, the photographs, and everyone at the hospital. We truly couldn’t have gotten through that time without her.” The couple explains.

In the days that followed, upon hearing the preliminary autopsy results, Victoria and Danny learnt more about what exactly Group B Strep is and how it can occur. However, it became clear that generally, there is a lack of education and awareness around Group B Strep. Although most pregnant women in Australia will be routinely tested for GBS, there isn’t a uniform standard across the country, and little information is given about the infection itself, or the implications of the test results – mainly that the infection is transient.

“There need to be more uniform protocols and processes around routine GBS testing and an effort to educate parents on what the outcomes mean. I had a negative test which, with the current protocols, meant that ‘nothing needed to be done’. I didn’t realise that a negative test at 36 weeks might still mean I could be a carrier at a later date. And from the mothers I’ve spoken to, neither did they. “Victoria says.

“This is the information we would like parents to know. Information that we wish we had known. There is currently a clear process for women who test positive – they receive antibiotics during labour. But for those who test negative, they are not told that their result could change in the future. We believe there needs to be more research conducted on why we choose 36 weeks as the testing point and what are the possibilities of administering a test closer to delivery to discover the potential risk and treat accordingly.” Victoria continues.

“We originally set up a fundraising page to collect donations in lieu of flowers for Kiera’s funeral. We thought we might get one or two thousand dollars, which we would donate to a relevant charity or service working in this area. We were surprised and touched by the generosity of our friends and family.” Danny says.

In addition to raising awareness and educating the public on the risks of Group B Strep, Danny and Victoria also wanted to support research into better understanding the testing and screening processes. It is hoped that through further medical research studies, we will be able to gain a better understanding of the infection, as well as a more robust screening process in terms of mechanisms used, and the crucial timing of testing.

“When presented with the opportunity to donate to research into GBS,we are hopeful that it may be able to improve the understanding around Group B Strep testing and also provide a source for more consistent information to be made readily available to parents” the couple explain.

As of September 2020, the couple has raised over $33,000 in memory of Kiera, to be donated to several causes that have become close to their hearts – Group B Strep research, The Mater Hospital and an array of bereavement and grief support charities.

The NORTH Foundation to fund Women and Babies Research at Royal North Shore Hospital and the Kolling Institute. The team, led by Professor Jonathan Morris, have begun a research study into the process of screening for bacteria/infection in pregnancy, with a specific focus on Group B. For more information on current research in this area click here.

The Mater Hospital, North Sydney to upgrade a private garden for quiet reflection and grieving.

The following charities, who provide support services for grieving and bereaved parents and fund research and education to prevent stillbirth and infant loss.

Heartfelt – A volunteer organisation of professional photographers giving the gift of photographic memories to families that have experienced child/infant loss.

Following the overwhelming support and initial outcomes that have been achieved for Kiera, Victoria and Danny have set up a fund in Kiera’s name. The fund will continue to raise money in her honour and provide crucial funding for ongoing medical research in this area as well as support for bereavement care services. www.kierascontribution.com

What is group B strep?

Group B strep is a type of bacteria commonly found in the intestines, rectum, urethra or vagina. Many women have it, and it usually causes no health concerns or symptoms.

The main concern is that if a pregnant woman carrying the bacteria passes it on to the baby before or during a vaginal birth. While many babies who get infected stay healthy, a small proportion (about 1 in 200) become very sick within the first few days of life. They get serious infections such as pneumonia and blood poisoning, or meningitis, which is an infection around the brain.

These seriously ill babies are treated with intravenous antibiotics. Most recover with no side-effects, but some don’t survive.

The group B strep test is a routine antenatal test. It involves taking a swab of the inside of the vagina. A doctor or midwife will usually do this for you. The swab is taken at 35 to 37 weeks’ pregnancy. Tests done earlier in your pregnancy aren’t a good guide to your condition at birth because the bacteria can come and go.

However, a negative result in a routine test doesn’t guarantee the mother will be negative at the time of delivery.

Risk factors for infection with group B strep

Babies are more likely to be infected with group B strep if: