By NORTH Foundation November 1, 2022 No Comments When Will Armitage retired from corporate life, he and his wife Barbara moved to Berry on the NSW South Coast to set up a small vineyard and enjoy more time with family and friends.

He became a passionate cyclist and he and Barbara enjoyed cycling holidays in Australia, Japan and Europe. He even managed quite a few of the epic Tour de France mountain climbs. In 2019, at the age of 71, he noticed his average speeds riding up the mountains around Berry were reducing so he went to see his GP.

“A blood test showed a low white cell count and borderline low red cells and after some monitoring, a haematologist diagnosed an autoimmune neutropenic condition,” Will said.

Further blood tests showed inconsistent results; sometimes white cell counts were very low while at other times they were normal. 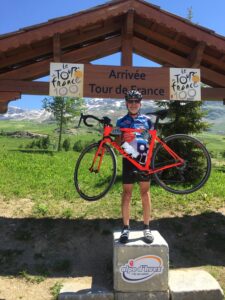 “After a while, we linked my cycling to my blood results; so an 80km bike ride before a blood test produced normal results, while no bike ride produced low white cell counts.”

Will’s blood counts continued to deteriorate, and he began to feel fatigued. A bone marrow biopsy in April 2021 showed the presence of Myelodysplasia (MDS), a type of cancer in which immature blood cells in the bone marrow do not mature or become healthy blood cells.

“I was working in my shed when I received the phone call. The next morning Barbara and I drove to see my haematologist and he told me I was too old for a transplant and advised me to start a course of the medication Azacitidine and continue that for the rest of my life.”

However, Azacitidine is only effective for a period of time before patients often go on to develop Acute Myeloid Leukaemia.

As he felt unsettled by this diagnosis, Will sought a second opinion from Dr Keith Fay at Royal North Shore Hospital, who talked about a new trial at the hospital using a drug called Magrolimab to improve the outcomes for Azacitidine treatment.

Will said, “I owe my good health today to Keith’s intervention. Within three days, I had met the trial team at Royal North Shore Hospital and after a series of tests I started cycle 1.”

After a few difficult months where it sometimes felt like he was feeling worse than before, Will started to show incremental improvement. Will is very grateful that the hospital team guided him through those early difficult days of the trial and supported him during the whole process. Will having his stem cell transplant in RNSH

“Nothing was too much trouble for the highly professional team.”

Will considered this trial as another project to conquer and he actively engaged with the trial, making changes to his diet at the advice of a dietician to help build up his gut biome. He kept exercising within the limits of his body and soon after, Will’s blood counts started to improve. Four months after starting the trial, Dr Fay raised the prospect of a transplant. “The wonderful Bone Marrow Transplant team at Royal North Shore Hospital kicked into action. I was lucky enough to be matched with a suitable stem cell donor from Canada and I was thoroughly briefed on the process and risks involved.”

Will and his wife Barbara worked hard to prepare for the rigours of the transplant.

“I had started back on my bike riding the mountains around Berry before the transplant and felt very privileged to have this opportunity so I wanted to prepare myself as best I could.” The three weeks in hospital before and after the transplant in February 2022 did not go without incident but Will believes that the nurses and doctors in the Royal North Shore Hospital Haematology ward managed complications immediately as they occurred.

“The care I received from these wonderful professionals at Royal North Shore Hospital was fantastic.”

Post-transplant recovery was slow as predicted but his blood counts reached the normal range six weeks after the transplant.

“There were plenty of ups and downs in my recovery but I was starting to feel considerably better and my blood counts were soon consistently in the normal range for the first time in years.” Will climbing Barrengarry Mountain in Oct 2022

Will had to have all his vaccinations again and after a further few months he was able to enjoy playing with his grandchildren and socialise with family and friends again. In October 2022, eight months after his transplant, Will rode up Barrengarry Mountain (elevation 660m) with 12 friends. He is now looking forward to more cycling holidays with his wife who he describes as being a, “constant loving companion and support on this journey.”

“I owe my second chance for a healthy life to the haematology team at Royal North Shore Hospital and was most impressed by their team-based approach.”

When he left the hospital, Will asked Dr Fay what project he could support to further enhance their work. After discussing Will’s request with his colleagues, Dr Fay nominated the FACT accreditation project.

Will decided to contribute to the NORTH Foundation and this FACT accreditation project to try and help the team succeed. Dr Fay and his colleagues are delighted that patients like Will are supportive of this project.

“Will made great progress under our care and we are really honoured that he has decided to support our plan to get FACT accreditation for the hospital,” said Dr Fay.

Will said, “I’m very proud to be supporting this project because it will enable the haematology team to get involved in international clinical trials and ultimately save lives – there’s no better feeling than being a part of that.”

Click here to donate to the FACT accreditation project.