Lewis’ story: On the road to recovery

By NORTH Foundation January 11, 2022 No Comments Lewis Gomes was enjoying some time away with his wife at their holiday house in Killcare when he suddenly fell down a lift shaft and was severely injured and unconscious.

When first responders arrived, Lewis was nonresponsive. He was placed under sedation and rushed to Royal North Shore Hospital where he was admitted for two weeks.

A few days after the fall, Lewis woke up in a hospital bed with no memory of the event, but recalls being told that he would eventually make a full recovery – something that seemed like a very unlikely outcome at the time. 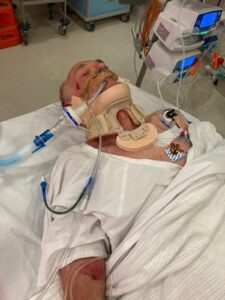 Lewis Gomes when he was first admitted to hospital

“It took me some time to comprehend what had happened to me. I was having problems processing the events and the injuries I had sustained,” says Lewis.

In line with COVID-19 protocols at the beginning of 2021, one member of Lewis’ family was able to sit by his bedside while he recovered.

Lewis says that focusing on getting better to be reunited with his family motivated him to embrace every opportunity to get back on his feet.

“For my wife, knowing that my son could sit by my bedside while I was in a coma, made all the difference for her. Even though I was unconscious, I know that I was not alone in the hospital,” says Lewis.

During his time at Royal North Shore Hospital, specialist doctors ran further tests and scans which revealed several unrelated issues to Lewis’ fall. As a result of the extra care and attention of his doctors, Lewis’ medical issues are now being addressed.

Lewis is grateful for the care he received from the fantastic staff and the comprehensive follow-up process and rehabilitation programs available within the Northern Sydney Local Health District to improve his health outcomes.

“I don’t recall being admitted into a public hospital ward in the past, but I can say that my experience was an exemplary demonstration of the benefits within the hospital system,” says Lewis. “From the time of my fall to the arrival of ambulances, attendance by police officers, mobilisation of the CareFlight helicopter to get me to Royal North Shore Hospital, was all together such a remarkable coordination of efforts by multiple parties and individuals for which I will be eternally grateful.”

Lewis is incredibly thankful to the team at Royal North Shore Hospital for saving his life. Eager to debunk any myths around the public health system, Lewis hopes that his story inspires others who have experienced a similar traumatic event to have faith in our hospital system.

“I have been able to return to driving and am able to do most of my past domestic chores. As a result of the challenging yet entertaining programs, my mental faculties are starting to return,” says Lewis.

“While I still have some issues with my lower spine, my overall recovery is truly remarkable and much of that recovery is due to the quick responses from the team at Royal North Shore Hospital.”

Although Lewis is still on the road to recovery, he is immensely grateful for the care that he received and is committed to doing as much as he can in his role as an outgoing patient advocate.

If you are interested in learning more about how you can donate to support the NORTH Foundation in supporting our research and healthcare services across the Northern Sydney Local Health District, please click here.