The rate of premature twin births in New South Wales has been steadily rising and is a concerning trend, warns Professor of Obstetrics and Gynaecology at The University of Sydney and Kolling Institute Director of Women and Babies Research Dr Jonathan Morris.

Jonathan and his team at the Kolling’s Women and Babies Research group at Royal North Shore Hospital analysed over 14,000 twin pregnancies from 2003-2014. The research found 49 per cent of twins were born premature before 37 weeks and 69 per cent of all births were planned either by pre-labour caesarean or induction of labour.

“In the short-term, babies born early were more likely to need help with their breathing, be admitted to a neonatal intensive care unit, have jaundice, spend longer in hospital and be readmitted to hospital in the first year of life.”

Jonathan said while an early planned birth is sometimes necessary, the aim should be to prolong the pregnancy for as long as it is safe to do so.

Lobaba Idris experienced this with her twins Zayn and Layla who were born via planned caesarean at Royal North Shore Hospital at 36 weeks and four days old.

In the last weeks leading up to the birth, Lobaba said every day was a relief. In 2020, Lobaba had a stillborn at 21 weeks. 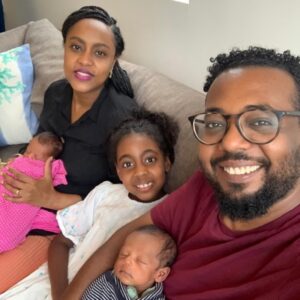 Lobada Idris and Karim Badri with their twins Layla and Zayn

“I was keen to stay pregnant for as long as I could, but I have an autoimmune disease that needs to be monitored, and my baby girl was much smaller than her brother,” she said.

“We tried to wait until I was 37 weeks but she was so tiny we just knew it was the right time to have a c-section.”

Layla was born at just over two kilograms and Zayn was over 2.6 kilograms.

“Waiting as long as we did I think helped. The twins didn’t need to go into special care and could come home,” she said.

Twins are known to be smaller than singleton babies, and the management of their growth poses unique challenges as the wellbeing of both twins has to be considered at all times.

“Use of singleton growth charts to plot the growth of twins are still being used without considering the different growth patterns which could occur in each twin pregnancy,” Jonathan said.

“This leads to healthy, well-grown twins being misclassified as growth restricted, and often results in unnecessary early birth, exposing these babies to problems associated with prematurity.”

In partnership with the North Foundation, Jonathan and his team are raising funds to evaluate and develop fetal growth charts for twin pregnancies.

“The growth charts will ensure the growth of twins are correctly monitored according to their own growth capacity, thereby avoiding unnecessary intervention and making it easier to identify twins who are at risk of complications,” he said.

Study results will also be used to develop national recommendations and inform clinical guidelines to assist clinicians to determine the best time for twins to be born.

“It means the health and wellbeing of hundreds of tiny lives could be improved and it will also reduce the number of twin babies needing neonatal intensive care after birth,” he said.

To donate to the study, visit https://northfoundation.org.au/how-you-can-help/women-and-babies-research/